WORLD-CLASS clowns Tom and Pepe are helping Swansea Council set up its very own elf service in time for this year’s Christmas lights switch-on in the city centre. 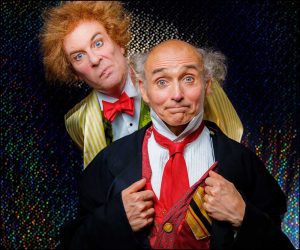 Locals wanting to play a full part in the countdown to Christmas are being offered the chance to become elves themselves as part of Santa’s Time Travelling Adventure in the city centre on November 18.

They’ll be taught all they need to know by two of the world’s finest clowns Tom Doughty and Pepe Silva at special rehearsals at the Brangwyn Hall on November 12, 14 and 16.

Robert Francis-Davies, Cabinet Member for Innovation, Regeneration and Tourism, said Tom and Pepe were world-class clowns who are aiming to bring brightness, fun and colour to the special event.

“This is the first time we’ve invited members of the public to join in our pre-Christmas event. It’s going to be a brilliant way to get the festive fun up and running.

“Santa’s Time Travelling Adventure starts in Princess Way and ends on Kingsway with four stopping points along the way so onlookers can enjoy the singing, the music and the sheer spectacle.

“Tom and Pepe’s merry band of Santa’s helpers will be making sure he gets all the support he needs to make sure everyone has a brilliant time.”

Tom and Pepe have both performed for the world-famous Ringling Bros. and Barnum and Bailey Circus. They now perform for one of Europe’s top circuses, the Cirque Arlette Gruss, as well as taking their two-man shows to towns and cities across the continent.

Tom said: “We’re really looking forward to our debut in Swansea and letting lots of would-be elves in on a few of our clowning secrets.

“Anyone’s welcome to come along for the rehearsals on November 12; the more the merrier. If you want to be stars of the show alongside Santa then we’re the people to see.

“Just bring yourselves and bags of energy. It’ll be a great night followed by a great afternoon in front of a sensational Swansea crowd.”